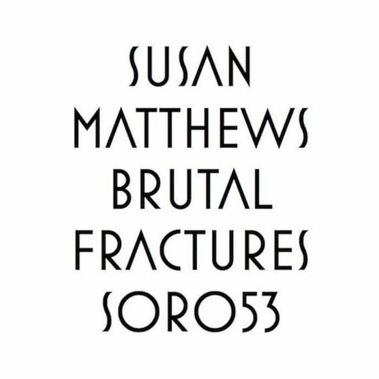 ‘Brutal Fractures reflects my fascination with Brutalist Monuments: concrete snapshots that capture a significant moment in history. It also represents the fracturing of the human psyche in response to trauma. Concrete, like the psyche, wears, weathers and erodes. It suffers through experience and its’ interaction with the world, the elements, the environment, the people… but, like the survival instinct of the traumatised brain, it remains resolute’ Susan Matthews, June 2017

Here we have more music by Susan Matthews of which I reviewed ‘From Veliko’ in Vital Weekly 1043 as the most recent release from her. On her first release she played pieces by Erik Satie (Vital Weekly 810) and a bit of piano is also part of this new release. On her new release she is inspired by “Brutalist Monuments: concrete snapshots that capture a significant moment in history. It also represents the fracturing of the human psyche in response to trauma. Concrete, like the psyche, wears, weathers and erodes” and she makes this audible with the use of piano, voice, percussion, field recordings, Yamaha PSS-480 Keyboard, toys and electronics, with Mark Ingram supplying bass guitar. It’s not that I recognized all of these instruments I must admit, but the main theme, which is ‘erosion’ so I believe is certainly something I think to hear in this music. It is one long piece, of twenty-two minutes and starts out with some far away, low humming synthesizer, which eventually slowly fades over in percussive sounds, light and unorganised. Following a very soft voice and drum sounds the next lengthy bit is more coherent eroded piece of percussion and synthesizer, with the whole end bit, the last six minutes a heavily amplified bass guitar and no doubt some extra treatments. Piano I noted was only at the very end of this. An excellent, well thought out piece of music, which again was a bit too short for my taste.
Frans de Waard, Vital Weekly Issue 1095, August 2017

Susan Matthews steps away from her own Sirenwire label for Brutal Fractures, releasing through Andrew Paine’s Sonic Oyster Records. A single 23 minute long avantgarde piece reflecting on brutalist monuments and the human psyche and their common traits. Sometimes atonal and abstracts, made up of a lot of found sound, switching into archival music and heavy drones. Tiny edition of 50 CDRs.

This toy instrument drone sees Susan Matthews release on Andrew Paine’s Sonic Oyster label, taking a brief sabbatical from her postcard avant-garde label Siren Wire, which recently offered the compacted and claustrophobic meditations of ‘From Veliko’. Here, Matthews focuses her ambience on brutalist monuments and their displacement from history — it speaks to their place in time as well as their inevitable place lodged our present.

Ambient artist Chihei Hatekayama recently dug up a little quote from Goethe comparing music to architecture, and it has its place here: he said that “Music is liquid architecture; Architecture is frozen music.” It’s this kind of thinking that seems present in Matthews’ music, which describes brutalism through both stasis and movement. Matthews keeps a solid tone brooding through the backdrop of this piece, but implements rattling percussion, sludgy beats and half-lost voices, creating a feeling of human disorientation around and inside the rigid monuments.

Matthews herself compares these concrete structures to “the psyche”, suggesting that its permanence is changed by everything around it. Hearing many of these rumbling, resonant sounds, you can imagine voices coming from within these buildings, or heavy percussive climaxes as dissolving forces on a once pristine object. This twenty-three minute slab of ambient rubble not only focuses on these structures — it also processes their decay.
8/10 Robin Staff review, Norman Records, 06 July 2017