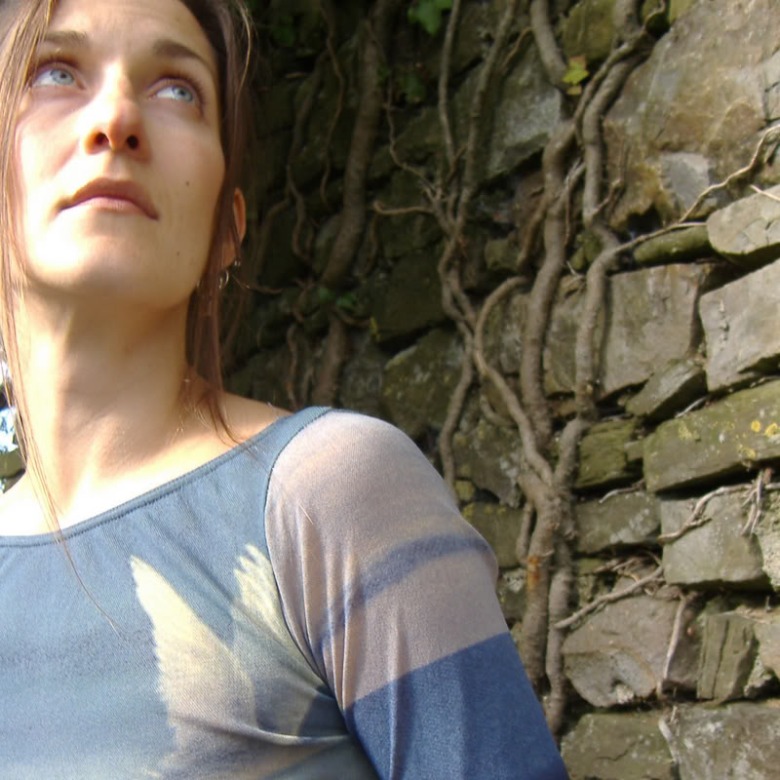 The Silent Architect (SW75) was made in 2007. On it, Ms Matthews appears on the cover (photographed by Mark Ingram) posing alongside the old stones of a country wall entangled with ivy creepers, with various expressions of uncertainty on her gaunt visage. On the grooves we hear ten ambiguous and semi-poetic explorations in sound, where the weather, the seasons, and the times of day are used to express aspects of unknown states of mind. Her own thin voice is aided by the eerie vocals of Hoel le Quenven on four of these cuts, some of which are enhanced with appropriate field recordings and sound effects, such as ocean waves on ‘The Mariner’s Lament’. Come to that, since there is the sound of a bonfire on ‘Samhain Lullaby’, I wouldn’t be surprised if all four elements (fire, air, earth and water) are represented hereon.

Using the most fragile and lucid instrumentation and composition Susan guides us on journeys across the loneliest of landscapes. Her musicianship transporting us on a most melancholic distraction from reality.  Beautiful.

The Silent Architect and Silent Variations, its corresponding EP of outtakes and alternate versions, represent Susan Matthews’ second album and EP releases of 2007 and her fourth full-length album for Siren Wire Recordings in three years.  With every release Matthews introduces new facets of her musical ability to her listeners, in this case a gentler, more serene aspect not immediately evident in her previous work.

Matthews’ work is always intensely heartfelt and often tackles personal issues and feelings with passionate conviction.  Frequently dark and impassioned but always experimental, her work shows a musician on a journey documented by each album’s release.  The Silent Architect sees Matthews strip back the layers and work at a more intricate level than ever before.  Her recognizable style is still very much intact and the experimentation is still there but the whole mood and feel of the album is calmer and more relaxed.  The opening tracks, “Dawn” and “Spring Dancing,” set the mood nicely with a chorus of birdsong accompanied by the folky harmonies of guest vocalist Hoel le Quenven followed by the soothing tones of Matthews herself.  Maintaining the gentle mood is “The Mariner’s Lament,” a mournful track featuring melancholy piano set to the sound of waves on the shore, seagulls crowing and a buoy clanging. Although this track is essentially classical in nature and consists entirely of just Matthews at the piano, the sentiment is one of sadly reflecting at sailors long lost at sea, almost as an ode to them and those they left behind.  For “Spiegelkabinett” and “Almost February” Matthews sets poet Alexander Booth’s prose to her own music, the former a cascading flow of hypnotic chimes and the latter focusing solely on the heartfelt longing in Matthews’ reading.  It is not until “Through Form” that we see Matthews’ familiar experimental leanings start to show through, the mix of le Quenven’s harmonies, spliced chimes and percussive elements further depicting the stripped back nature of The Silent Architect.  Stripped back further still is the piano-based track “Weals,” with its careful use of space, silence and the creakings of the piano as it is played.  Although one of the most minimal tracks on the whole album “Weals” exhibits an intimate insight into the contemplative thoughts and feelings of the player.  Continuing the theme of utilizing field recordings into the album is “Samhain Lullaby;” the crackle of a roaring fire vividly juxtaposing a baby crying, the electronic sounds of conflict and the fragile French meanderings of le Quenven apparently trying to shield the child from the dangers lying outside with a gentle song and comforting safety of home.  Le Quenven’s manipulated harmonies also appear on “Keel,” initially a sinister track of dark intent featuring torrential rain and a thunderstorm that takes on an entirely more welcoming tone with the introduction of Matthews’ gentle piano playing.  Closing the album is the hymn-like “The Passing” with its sombre clock chimes and Matthews’ gentle harmonies.

The Silent Architect’s sister EP, Silent Variations, features alternate versions of four tracks from the album.  Released at the same time as the album, Silent Variations gives Matthews an opportunity to experiment further with some of the album tracks and present them in a different light.  The alternate version of “Weals” for example is essentially the same as the album version but augmented by a low buzzing drone while “Spiegelkabinett” is slightly more stripped back and less layered than its album counterpart.  “Through Form to Form,” one of the more experimental tracks on The Silent Architect, loses its underlying organ-like drone to emphasize its more experimental qualities and effectively change it’s ending, putting the whole track in a different context to the album version.  The Silent Variations version of “The Mariner’s Lament” entitled “Lily (The Mariner’s Lament)” strips away the field recordings and leaves just Matthews’ piano playing in its full glory, switching the mood of the track to one that could quite easily represent the sound of an after dinner soiree in a salubrious drawing room many years ago.  Closing the EP is “Keel (Impression)” which dispenses with le Quenven’s slightly disturbing opening harmonies and thunderclaps throughout, transforming the track into an entirely more comforting prospect complete with the sound of gentle rainfall.

The Silent Architect represents a real change in focus for Matthews; gone are the complex intertwining layers of dark sound, the emphasis being on gentle minimal sounds accompanied by carefully chosen field recordings.  The end result is an interesting one as Matthews’ is still able to create an album that, while it is markedly different in content and style to her previous albums, is still very much recognizable as her work.  Silent Variations takes the concept a stage further and makes subtle but significant changes to a handful of album tracks, often changing the mood and atmosphere completely.

Following Matthews on her journey of discovery and exploring her next release is often a revelation as you never quite know what to expect but you know it will be equally as captivating and absorbing as her previous output.  Never one to sit still for very long, Matthews is already hard at work on her next album and has a slew of other projects in the pipeline including compilation tracks, a handful of collaborations and a remix album.  Matthews is a truly talented artist who is constantly pushing the boundaries of her musical style.

The word experimental can be conjoured up to cover a wide range of ideas, themes and sins. It covers anything from abstract noise thrown together in cacophony, through to minimalist soundscapes. It’s a catchall for music that defies conventional description. I don’t have the vocabulary to describe it, but then that’s half the point. Music doesn’t need words to invoke thoughts and feelings. It can affect you without lyrics. “The Silent Architect” is thought provoking and evocative. I just can’t decide if I like it.